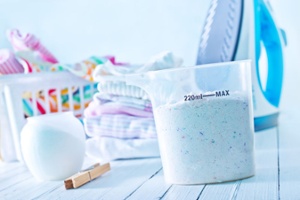 (The United States Court of Federal Claims (COFC) decided the case of American Sanitary Products, Inc. v. United States,  2017 WL 3124441. Established pursuant to Article I of the U.S. Constitution, the COFC deals mostly with monetary claims made against the U.S. government. This court commonly hears cases concerning government contracts and tax refunds, among other subjects.

On September 9, 2016, the Federal Bureau of Prisons (BOP) posted Request For Quotations (RFQ) on the purchasing website for the General Service Administration (GSA). The RFQ called for the purchase of “solid laundry products” that were certified as Safer Choice. The RFQ also provided that the “lowest priced, technically acceptable” bidder would win the contract.

The Contracting Officer (CO) reserved this RFQ for small businesses. Additionally, the RFQ provided a price formula for the CO to evaluate. The price formula required all bidders to calculate prices “based upon the amount of laundry product required to clean 100 pounds of laundry.”

After reviewing the two bids, the BOP and CO determined that both were “technically acceptable.” After a price comparison, the CO named American Sanitary as the “lowest priced” option. Consequently, the CO awarded the contract for this RFQ to American Sanitary on December 1, 2016.

On December 15, 2016, Native Green issued a challenge to the Government Accountability Office (GAO). In their protest, Native Green claimed their price quote was negatively impacted by an underestimate in the RFQ.

In light of Native Green’s protest, the BOP reviewed the RFQ and confirmed the presence of an error. The CO miscalculated the amount of weight per case of laundry product. To rectify this error, the CO recommended cancelling the RFQ and resubmitting for bids with an updated estimate. As a result, the BOP cancelled the original RFQ on January 12, 2017.

On January 13, 2017, the BOP alerted American Sanitary of cancellation of the RFQ and corresponding contract award. The GAO also rejected Native Green’s challenge.

After the GAO dismissed the protests, American Sanitary filed a two-count complaint with the United States Court of Federal Claims (the Court). American Sanitary alleged that the cancellation of RFQ and contract award was “arbitrary, capricious, and contrary to law.”

In reviewing American Sanitary’s complaint, the Court first underlined a key tenet of government contract interpretation. Essentially, a CO has wide latitude in the exercise of their duties. But the CO must employ “rational reasoning” and consider “relevant factors.”  As long as the CO acts within those parameters, the Court will not interfere with the CO's decision.

The Court then highlighted that the error in estimated quantity was substantial. If the BOP needed more product than was quoted in the RFQ, then other bidders could leverage “economies of scale to quote a lower price per ounce.” Consequently, the estimate error was a rational reason for cancelling and resubmitting the RFQ.

The Court also touched on the claim that Native Green was “technically non-compliant.” Despite the potential merit of this argument, the Court determined that it was inapplicable here. The BOP cancelled the RFQ to rectify the quantity estimate error, which required a resubmission for new bids. Accordingly, it does not matter whether Native Green was compliant.

Do You Need to be Represented at the Court of Federal Claims by an Experienced Government Attorney?

Navigating the ins and outs of government contracts can be a challenge. There are various legal regulations and considerations at play, which can make it difficult to understand the proper course of action. But a knowledgeable government attorney can make all of the difference, helping you avoid pitfalls and resolve any issues that might arise.