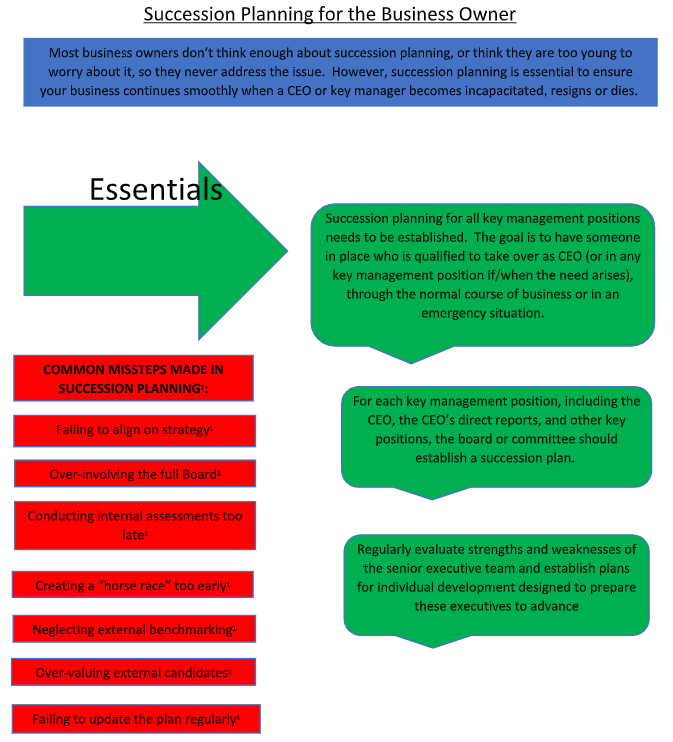 Every Board of Directors has the fiduciary duty to address major business risks, including the loss of a senior executive. The board must act in good faith, with due diligence and in the best interests of the company. “The board’s approach to succession planning and unexpected transitions should be reasonable under the circumstances.”

Some Boards may not be engaging in sufficient succession planning that reflects the importance of leadership transitions.

(a) Retain advisors for assistance;
(b) Consider internal candidates;
(c) Conduct an external search; and
(d) Determine that enough information has been obtained to support an informed judgment.

A major component of succession planning is management development. A culture of leadership development needs to be established and reinforced.

“Best-practice succession planning procedures include:
a) assessing and evaluating candidates regularly and consistently;
b) involving executives and senior management in both development and succession planning;
c) focusing on individuals' strengths and weaknesses and targeting individuals' assignments based on this information;
d) reinforcing a culture of leadership development, planning to retain and obtain top talent by individual as well as by position, and
e) providing feedback and opportunities to candidates assessed. (APQC, 2001; Best Practices, LLC, 2008; Cohn, Khurana, & Reeves, 2005; Conger & Fulmer, 2003; Fegley, 2006; Groves, 2007, Herman, 2006).”

In the event of a CEO transition, having a plan in place assists the Board in taking appropriate action.
An independent director should be chosen to organize special executive sessions to discuss issues related to succession and should have the ability to contact all independent directors in an emergency fashion. Outside counsel should be retained to assist with employment law questions as well as SEC reporting and corporate governance.
Public relations and investor relations may also need to be taken into consideration.
If there are no qualified internal candidates prepared to take over the role, a search firm may also need to be retained to locate a qualified external candidate.

6. Requesting a Resignation from the CEO

There could be a time when requesting a resignation from the CEO is the right move to make. There are numerous factors to be considered before making such a request.
A. The Board needs to determine that a majority of the directors is interested in removing the CEO in an expedited fashion.
B. A confidential executive session may be called for independent and non-management directors to discuss options without the CEO present. During this private executive session, the formal decision to replace the CEO will not be made. The directors will consider whether to pursue the resignation of the CEO; potential successor(s) (either interim or permanent); potential successor(s) for the internal candidate selected; how to manage the potential impacts on critical relationships and agreements of the transition to a new CEO; and when general counsel should be information of the consideration of replacing the CEO.
C. Outside counsel should review by-laws and corporate laws, as well as any employment agreement with the CEO concerning his director role.
D. Once the independent and non-management directors agree to seek the CEO’s resignation, typically one or two of the directors will meet with the CEO and discuss the possible terms for his resignation. If a termination for cause is a possibility, a discussion is typically had within the Board as to whether it would benefit the company to accept a resignation rather than go through the potential scandal of a termination for cause. During this discussion, the Directors need to make it clear that they are not negotiating whether or not there will be a resignation, just the terms of that resignation. It is not in the best interest of the company to allow the CEO to think he has “wiggle room” and could convince any Director(s) to change their minds. The Directors need to provide a clear picture as to what the terms of the resignation will look like.
E. Once the CEO has agreed to resign or it has become evident that he will not agree, the Board of Directors must hold a formally noticed meeting, for which the CEO is entitled to notice. If the CEO attends the meeting, the Board can seek his recusal or pass a resolution that the decision be delegated to the independent and non-managing directors and a private executive session can be called at a later time and/or difference place.
F. Next, the board will hold a meeting to appoint a successor or interim CEO.

While succession planning is sometimes a challenge, it is one of the most important tasks a Board must address. It is important to remember that succession planning does not apply only to the CEO, but to all key management/senior executive positions as well as the Board itself. Management development is key. The end goal is to be prepared for any anticipated or unforeseen vacation of a key position in your company.
Book Free Assessment