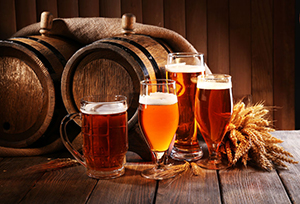 A long-running trademark dispute between the City of Portland and a craft brewery within that city, Old Town Brewery, is over, according to an announcement by the Oregon Brewers Guild. Old Town Brewery, the owner of a registered federal trademark since 2012, had been defending its registration against the City of Portland for two years. The fight has been over the city’s application for a trademark that includes a leaping stag. Old Town received a federal registration for the stag for selling beer in 2012 and was recently granted incontestability.

Portland attempted to register a trademark bearing that same leaping stag for beer, amongst other things, beginning in 2015. The U.S. Patent and Trademark Office (USPTO), which governs federal trademark registration, has denied Portland on at least two such applications. (See for example, here and here). Regardless, Portland continued to fight the USPTO and Old Town, driving up costs for both the city and the brewery. The settlement, announced last month, should therefore provide welcome relief for the brewery, which has a relatively modest but respectable annual output of about 1,100 barrels (compared to Portland, which has an annual budget of $4.77B).[1]

So what is an incontestable trademark?

But this all begs the question: wasn’t Old Town’s an incontestable trademark? What does that status even mean if Portland was able to squeeze concessions out of the owner of a mark that could not be contested?

“Incontestable” is a word that was born to appear in cease-and-desist letters. But it does not mean what it appears to mean. It is not a fireproofing that wards off any possible challenge to a trademark. It’s more like flying business class compared to flying coach: it’s nicer, it does more things for you—but you’re not invincible.

Consider that a federal registration confers certain benefits on trademark owners. For example, it provides prima facie evidence of:

Prima facie evidence means that the owner is afforded a rebuttable presumption: the burden is on the accused infringer to show the registered mark is not valid, or registered, etc. After five years of continuous use of the mark, the owner can file for incontestability.[3] If it is granted, registration then becomes conclusive evidence of those same benefits, i.e., the mark’s validity, registration, etc.[4]

Incontestable may still be challenged

So “incontestable” can be contested and “conclusive” may just be a good starting point, as though the words themselves are negotiating with one another. It’s a lawyer’s dream and everyone else’s nightmare. Before you negotiate a cease-and-desist for trademark infringement or any other demand letter, find out what the five dollar words mean to your situation and what hidden doors they may leave open.

Update...In January 2018, the City of Portland and Old Town Brewery settled their dispute.

[1] According to the Oregon Liquor Control Commission reports from December, 2016, and November, 2017.