Standard of Review at Federal Claims Court for Bid Protest 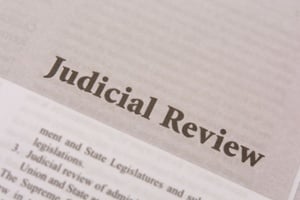 According to the COFC, the standard of review for the typical bid protest is "whether the agency action was arbitrary, capricious, an abuse of discretion, or otherwise not in accordance with law." (the Administrative Procedure Act standard). 28 U.S.C. § 1491(b)(4) (incorporating the APA standard set forth in 5 U.S.C. § 706 (2012)); Banknote Corp of America Inc v US, 1350-51 (Fed. Cir. 2004) (citing Advanced Data Concepts, Inc. v. United States, 216 F.3d 1054, 1057-58 (Fed. Cir. 2000)). Also, the Court remarked that "a procurement decision may be set aside if it lacks a rational basis or if the agency’s decision-making involved a clear and prejudicial violation of statute or regulation."

Deferential to the Agency

The Court indicated in their decision that the standard of review is “highly deferential” to the agency's determination.  It offered examples of arbitrary and capricious actions such as “when the agency ‘entirely failed to consider an important aspect of the problem, offered an explanation for its decision that runs counter to the evidence before the agency, or [the decision] is so implausible that it could not be ascribed to a difference in view or the product of agency expertise.’”  Ala. Aircraft Indus., Inc.-Birmingham v. United States, 586 F.3d 1372, 1375 (Fed. Cir. 2009) (quoting Motor Vehicle Mfrs. Ass’n v. State Farm Mut. Auto. Ins. Co., 463 U.S. 29, 43 (1983)) (alteration in original). The court will, however, “uphold a decision of less than ideal clarity if the agency’s path may reasonably be discerned.”  Bowman Transp., Inc. v. Arkansas-Best Freight Sys.,Inc., 419 U.S. 281, 286 (1974) (citation omitted).

The decision makes it clear that the burden rests on the protestor to establish prejudice. Bannum, 404 F.3d at 1358.  The protester must demonstrate a high likelihood  it would have received the contract, if the agency hadn't erred. Bannum, 404 F.3d at 1353; Alfa Laval Separation, Inc. v. United States, 175 F.3d 1365, 1367 (Fed. Cir. 1999); Data Gen. Corp., 78 F.3d at 1562. It articulated a two prong standard of review.  First, did the protester, Eco Tours, have standing to bring the suit; and two, was it substantially prejudices by the agency's errors.  The Court decided the "standing" issue in favor of Eco Tours based on the fact that received the highest cumulitive scores in its proposal.  This was particularly salient in the satisfying the standard of review for bid protests. We will continue to blog on this case as it is valuable in unpacking your firm's chances of winning a pre-award protest against the National Park Service.